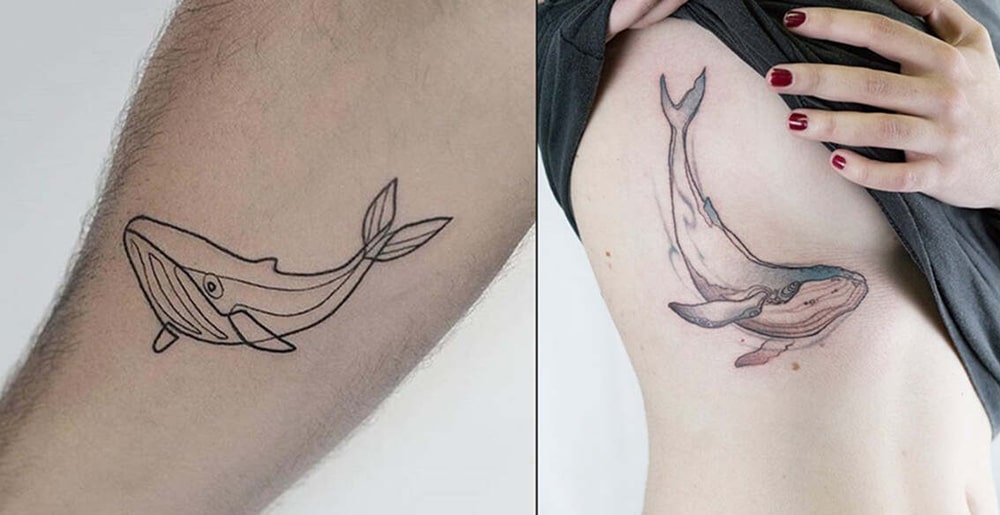 Whales are water-dwelling mammals and belong to the same group as porpoises and dolphins. They are of the order Cetartiodactyla. Their lives revolve around traveling thousands of miles to feed and mate. Whales come in all shapes and sizes and some even have tusks. The largest whole is the blue whale and the smallest whale is the dwarf sperm. Whale tattoos are related to and calm and serene demeanor that helps us move forward with our lives. In this article, we will know about some trending whale tattoos and their meaning.

Whales symbolize longevity and divine justice according to some cultures and legends. They are a source of food as well as a powerful totem and a spiritual guide. They help the survival of the human race physically and culturally. In some cultures, whales and dolphins are superior beings and organize funerals for the stranded ones. A whale tattoo symbolizes virtues like power, intelligence, and gentleness. Some also embody spiritual beliefs and peaceful life.

Trending Whale tattoos with their meanings

Humpback whales are some of the most popular whales ever because of their mass depiction in commercial ads, movies, and books. The whale’s look and personality make it a popular choice amongst tattoo enthusiasts. It is famous for its whale songs and they attract mates. They are a good option if you are a cheerful and attractive person by nature.

Blue whale is the largest mammal on earth and hence is one if the most popular whales to get tattoos on your body. Their tongues can weigh as much as an elephant and are as huge as an airplane. The lack of gravity in the ocean is one of the main reasons that these whales grow this gigantic. Blue whale tattoos are related to serenity and Intelligence and that’s why they are one of the most popular tattoos to try.

Sperm whale are depicted as vicious animals out for blood in the terrifying seas but they are just a few majestic creatures trying to survive in the survival of the fittest. You can get this tattoo inked if you have a fierce and no-nonsense personality.

This tattoo symbolizes dreams and their manifestation. They also represent purity, fertility, motherhood, and growth. As there is a crescent moon in the tattoo, it is the symbol of renewal, new beginnings, and intuition.

Whale inside a potion bottle tattoo

A whale is seen inside a potion bottle inside this tattoo which symbolizes solitude, wisdom, strength, protection, and psychic abilities. If you are spiritual and creative, this might be just the right tattoo for you to describe your nature.

Also, known as the ‘Unicorn of the sea’, the Narwhal tattoo symbolizes magic, power freedom, and devotion. As unicorns are related to fantasy and magic, this tattoo also represents the nature of the person who believes in mystical powers and empathic abilities. It also represents spiritual connection, wisdom, protection, and devotion.

This tattoo looks like an animated whale and gives almost an illusion of a visual and electric effect to the mammal. It represents solitude, wisdom, persistence, and attraction. If your nature is dynamic and electric and you spread zeal everywhere you go, this might be the right option for you.

Whales as tattoos can open our minds to a different world where psychic attentiveness flows. The symbolism that whales have surrounding them is magnificent. There are times when we find ourselves trapped in bad water and we get over our heads, whales can bring us out of it and into calm waters. These mammals are extremely intuitive and tattoo artists say that power can be invoked simply by knowing that you have this mammal inked on you.