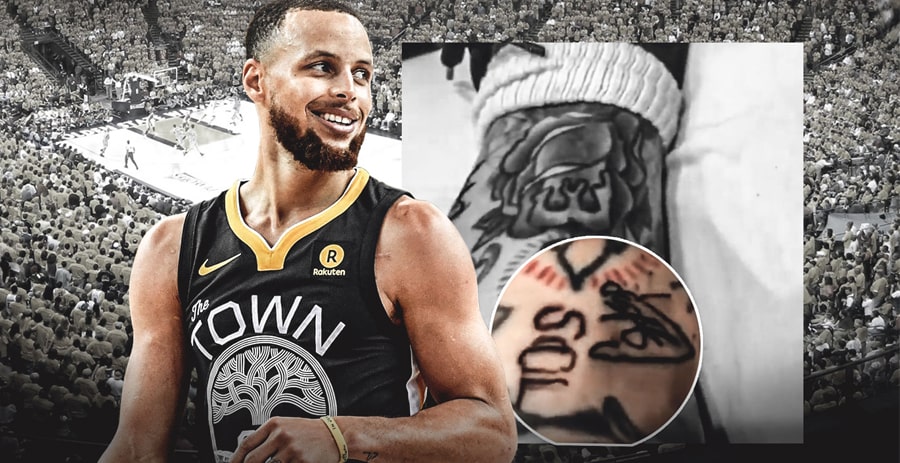 Wardell Stephen Curry II (born on 14th March, 1988) is an American professional basketball player for the Golden State Warriors in NBA. Wardell is more famously known as Steph Curry. He has inspired many teams to regularly utilize the ‘three point shot’. He is married to Ayesha Curry. Steph has won many awards and honors throughout his career, he has won the NBA all star award six times, has been MVP twice, and has also won the NBA championship thrice with his team, Golden State Warriors. When people talk about his achievements and his career, they also mention his tattoos. He has got a few tattoos on his body. Below is the list of Steph Curry tattoos with their meaning.

Where?: On his right and left bicep

Stephen and his wife Ayesha got these tattoos together. ‘><’ represent John 3:30 verse of the Bible which reads “He must become greater, I must become less.” Woe stands for Working on excellence.

Where?: On his ring finger

This tattoo is to show his love for his wife Ayesha. This letter A stands for Ayesha. Steph got this tattoo after his engagement with her.

Where?: On his left wrist

Steph has got his last name Curry “קרי tattoo in his left wrist in Hebrew language.

Where?: On his left and right wrists

He has got האהבה לא תבל לעולם אך” tattoo on his inner right wrist in Hebrew, this writing is from the 1 Corinthians 13:8, which translates to “Love never fail”. His wife Ayesha has also got the same Tattoo on her body. On his left wrist he has got “TCC” tattoo. TCC stands for Trust, Commitment and Care. Below the TCC Tattoo he has got number “30” tattoo which is his jersey number.

Stephen Curry is one of the greatest basketball player in NBA history. He is famous for a lot of things but his tattoo have also been a talking point between his fans. Steph has got tattoos for to his wife, his religious beliefs and basketball. Looking at his tattoos he seems to be a dedicated  religious person. He has got verses from the Bible inked in Hebrew language. He got a few tattoos inked with his wife as we can see the same tattoos on Ayesha Curry’s body.