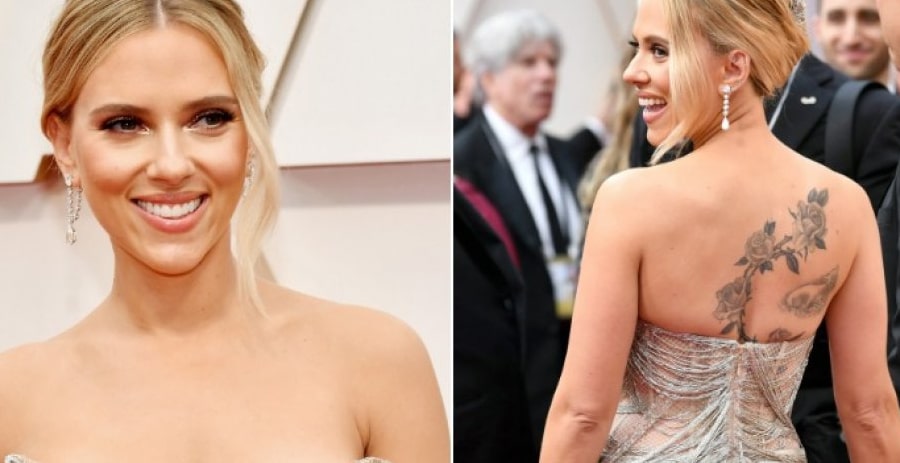 Scarlett Ingrid Johansson (born on 22nd November, 1984) is an American actress and model. She started her career when she was only a child. She got critical acclaim after her role in the movie The Horse Whisperer at the age of 13. Her successful contributions include Girl with a Pearl Earring, Lost In Translation, Vicky Cristina Barcelona, The Nanny Diaries and the worldwide hit The Avengers in which she played the role of black widow. Scarlett Johansson tattoos are few but quite popular. She also released her own album in 2008 following which she made a Broadway debut. She has garnered Oscar nominations as well for her roles in the movies Jojo Rabbit and Marriage Story.

Like many other actors and actresses, Scarlett also loves depicting the various phases of her life through inking them on her body. The meanings of Scarlett Johansson tattoos range from personal to her professional life.

Scarlett has got a tattoo mentioning the letter A inside two interlocking circles on her left ankle. It looks a little bit like the infinity sign. She hasn’t given the public any information about who this ‘A’ is.

Where? : Inside of her left forearm

It is a fact that sunrise symbolizes happiness, optimism and faith. Scarlett has a colorful sunrise tattoo on her harm which she said makes her very happy.

This tattoo was first seen on her wrist during “The Avengers” premiere in 2002. The bracelet contains the hammer of Thor and i scribes the words ‘I ❤️ NY’. This is one of the tattoos that signify her love for avengers.

Scarlett has got an inverted horseshoe tattoo on her right ribcage. The words “Lucky You” are inscribed on it. Fuzi Uvtpk, a French tattooist inked this tattoo on her body and is a symbol for good luck and success.

Scarlett has got a beautiful floral pink design with a sitting lamb inked on her back. This tattoo between her shoulder blades really adds to her beautiful characteristics. This tattoo is the biggest of all tattoos on her body.

A rose-like pattern is also inked on her left ribcage which Scarlett is yet to reveal to the public. It looks as if leaves are embedded all around that rose. This tattoo signifies feelings, a motions and the idea of love.

The tattoo of an own on Scarlett’s right ribcage is a sign of knowledge, wisdom as well as transition. This tattoo was accidently seen by the public when she dressed to kill on the 2019 Comic Con Red carpet.

As told by Robert Downey Jr. In an interview, all members of avengers except Mark Ruffalo have inked the same tattoo on their bodies a tribute to the hit franchise. He also mentioned that the idea was originally Scarlett’s. She plays the role of black widow in avengers movies.

Inking bodies has been an evergreen trend among celebrities since generations and Scarlett has also adapted to the trend well. She has a total of 8 tattoos all over her body signifying various important events of her life. These tattoos definitely add to her elegant bodily feature. She definitely takes her professional life very seriously, one of the instances being her embedding the avengers logo on her right arm like the other 4 of her counterparts. Her tattoos differ in size and shapes as well as colours ranging from black ink to water colours.