Concept of tattoo is a body modification ink in the dermis layer of the skin, to change the pigment. It can be temporary or permanent. Sanskrit is an ancient language, first to write ancient Hindu texts and their religious documents, known as Vedas and Upanishads. Sanskrit tattoos are elegant but complex in nature. Goddess names and mantras are the most famous among tattoo choices. Sanskrit is a phonetic language due to this the influence of this language tattoo is huge. Sanskrit tattoos became popular and famous due to the increase in the knowledge of Vedas, Mantras, Philosophical and meditation practices.

The origin of Sanskrit tattoo is India, where the history of permanent tattoo is more than 100 years old. The ancient tribal communities of India used it as a permanent. Marking on their arms and other parts of their bodies as their tribal identity. The ancient maze-like carving and prehistoric rock were copied by tribal people. This tattoo is pronounced as ‘Gudna’ (burying the needle in Hindi) and flaunted the marking as a jewellery, a permanent jewellery which cannot be taken away and a unique identity.

In the North east tattoos were used to save women from neighbouring tribes. So that attractive women do not get kidnapped. In south India this tattoo process of tattoo is called pachakutharathu. The special design of kollam, a sinuous labyrinthine design to ensnare evil beings on the bodies to permanently keep them safe and secure until they reunite with their ancestor in the afterlife. Central India also has a long tradition.

The Dhankus in Bihar believe that tattoos deglamorize women- this helps the to evade the eyes of influential sex predators. As they have purdah system women from lower caste used to get tattooed on the visible parts of the body. This was to make them unattractive.

The Munda tribe of Jharkhand tattoo signifies courage, record historic events. Men even today get three straight vertical lines to their foreheads. It is because Munda tribe defeated Mughals thrice. India has a long history of geometrical patterns of tattoo for looking beautiful and unattractive at the same time. Sanskrit is the ‘language of gods” due to its spiritual influence.

The recitation of Sanskrit mantras creates harmonious vibrations, that brings peace in the mind of people and evoke a sense of divine presence, due to this the fashion of Sanskrit tattoos came in trend. And it is most seen on the body of a spiritual person who somehow feels connected to god and their own self.

Here’s a list of the Sanskrit tattoo symbols along with their pronunciation and meaning.

Om or aum – ॐ – One of the most wanted tattoos in Sanskrit as Om is a spiritual sound and an auspicious icon in Hindu religion, it also used mantra in Hinduism, Buddhism, Jainism and Sikhism.

Gayatri Mantra – ॐ भूर्भुवः स्वः तत्सवितुर्वरेण्यं भर्गो देवस्य धीमहि धियो यो नः प्रचोदयात् ॥ – It is one of the most pious tattoos in the universe. It has its reference in various Vedas, Puranas, and Bhagavatas. It is like a hymn in various prayers, as it has divine meaning.

Annugacchatu pravaha – अनुगच्छतु प्रवाह – It means go with the flow, it can be in the context of a painful memory or warm memories.

Tat Parivartan Bhav – तत्परिवर्तनं भव – It means be the change you wish to see.

Ahimsa – अहिंसा – It means ‘not to injure’ and ‘compassion’ and refers to a key virtue in Indian religions.

Man Manayatey – मन् मन्यतेय – It means “To Believe” . It shows a dull attitude of spirits, will-power away from self-doubting.

Satyam-Shivam-Sundaram – सत्यं शिवम् सुन्दरम् – It is a very attractive tattoo due to its Devanagari script and it means truth is eternal and beautiful.

Timiram – तिमिरं – It means “Darkness” and it represents tough and low times of a person’s life.

Namaste – नमस्ते – It means Hello and it looks good on ‘happy-go-lucky’ kind of people.

Aham Brahmasmi – अहम् ब्रह्मास्मि – It means “Infinite by nature, the supreme self” and the word Brahman literally means ever-expanding; hence the meaning of this phase is I am Brahman.

Some Other Trending Sanskrit Tattoos

It’s the beauty of Sanskrit tattoo that it’s not just a tattoo conveying meaning but with a deep value that is in it. Behind that hymns, the vibration that happens while chanting, plays a huge role in mental wellbeing. Sanskrit is a language which is directly in relation to the Gods. Thus, its spirituality is beyond one’s imagination. It not only provides mental peace or motivation, but it heals each object present in the environment, either it be human beings, animals, or plants. So Sanskrit tattoos are basically for creating peace of mind, will power, self-motivation and self-validation as use of Sanskrit chants liberated a person from this materialistic world. And it’s more about life skills and beauty of Sanskrit tattoo is its spiritual wealth. Many celebrities have inked Sanskrit words not just for the beauty but to get self-validation or that empowerment within internally. 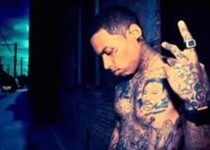