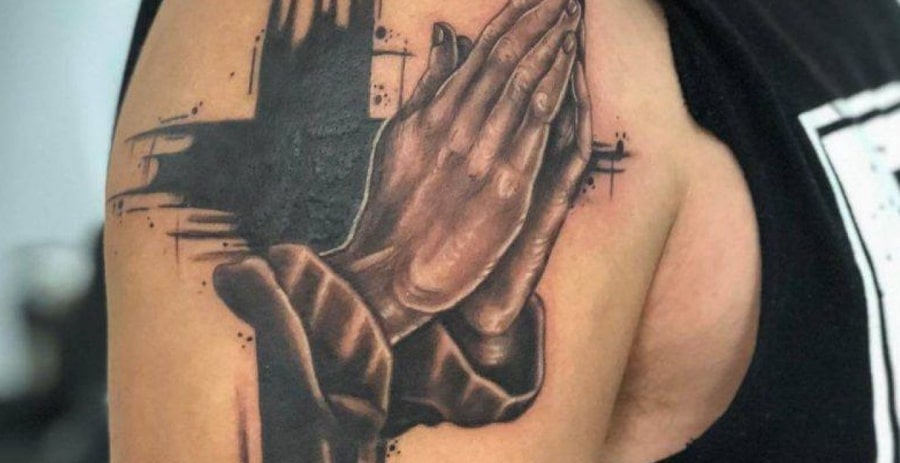 Praying hand tattoos have a generic meaning and have religious connotations. However, in many countries like India, Japan, China, etc., the folded hands have multiple other meanings. It can be a sign of respect, it can be a sign of welcome or hello, and it could also mean thankyou. The iconic pattern of folded / praying hands tattoo is often associated with religion and was first depicted by German painter, Albrecht Durer in the year 1508. Let’s have a look at some of the praying hand tattoos.

The praying hand tattoo trend had its start with the religious people getting tattoos to display their spirituality or their connection with God. It is a sign of religiousness and belief. However, many people started to interpret the meaning of this tattoo according to their needs and values. Some might use it to signify respect and harmony. Others started getting his tattoo to honor the people they value and love, or to remember the special people in their lives who are no more.

This tattoo is for displaying strength and courage. It is a profound dedication to one’s belief and faith. It means that the bearer of the tattoo doesn’t fear anyone except God.

This tattoo signifies the zest for life. It is generally for the people who are intense.

This tattoo depicts the actual praying hands of the person. it is a belief that Albrecht, the person who made the praying hands artwork, composed it as a token of affection for the mayor of Frankfort in the 15th century. However, the art did end up being destroyed in a fire but certain copies are still there. This artwork has got appreciation by many who turned it into body art.

The roses represent the hardships and the beauty of life. The praying hands represent the bearer’s faith in God, the belief that God will always help those in need.

As the name suggests, this tattoo is for those who want to honor a particular person who has been a help throughout the dark times or to honor those who are no more.

Its a 3D tattoo which represent the devotion of the person to the God. It enhances the religious sentiment of the bearer. It is for representing peace and tranquility.

God is the judge tattoo

This tattoo signifies the belief of the bearer. It means that no one other than God can judge a person. The bearer believes that the God is the only one who is capable of judging a person and the judgements of the people do not mean anything in front of the God’s judgement.

This tattoo represents the bible along with praying hands. It is generally preferred by the people who practice Christianity.

The praying hand’s tattoo can represent anything that the bearer wants it to represent. But its generic meaning is devotion. A person could be devoted to anything and anyone. This tattoo is extremely versatile and creative. It isn’t restricted to a particular age group. Anyone can get it and modify it accordingly.