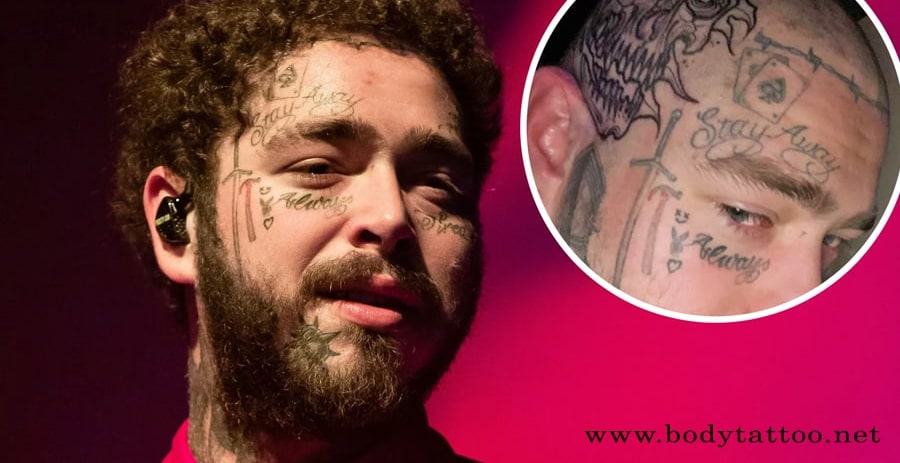 Post Malone (born on 4th July 1995) is an American singer, songwriter, rapper, and record producer. He was born Austin Richard Post but later took the stage name, Post Malone. Post Malone is known for bending various genres like R&B, rap, rap-rock, hip hop, etc. His song “Rock star” got immensely popular and he gained wide recognition and his single topped many charts worldwide. Let’s look at some of the Post Malone Tattoos & Their Meanings.

Post Malone got widely recognized after his 2015 debut single, ‘White Iverson’. He has been in the spotlight for numerous controversies regarding the statements he makes to the media. He has a number of tattoos inked on his body including his face. Most of these have been inked by himself that are still considered controversial. Malone has a total of 77 tattoos inked on his body.

Where?  : Above his right eyebrow

Many fans previously thought that this tattoo meant that Malone wanted people to stay away from him but he later cleared the confusion saying that they were simple song lyrics.

Where? : Below his eyes

Malone explained the reason for getting this tattoo saying that he got this tattoo because he wanted something that’s relatively of the same length under each eye.

Where?  : Upper portion of his forehead

Some people believed that Malone was suffering from mental health issues and that was the reason he got so many strange tattoos on his face. Though he never discussed any issues like these with the public, he confessed that he got all the tattoos on his face to annoy his mother.

Where? : His left hand

Malone got a portrait of John F. Kennedy inked on his left arm.

Where? : His left arm

Malone has got a portrait of Johnny Cash on his left arm. He was an American actor, singer, songwriter and a guitarist. Malone inked him on his arm after he died in 2003 as a tribute. He also uploaded a picture on this tattoo on his social media.

Malone confessed in an interview that he got all these tattoos after getting inspiration from Justin Bieber.

Malone has an aggressive Grizzly Bear Face on his right hand that signifies danger, power, and strength.

Malone I sled this tattoo on his right forearm as a tribute to the many soldiers from different countries who lost their lives in the world war.

He admitted in an interview that this tattoo on his left finger was the most painful of all his tattoos. It was as if they were tattooing his soul.

Malone has got portraits of his favourite artists like Kurt Kobain, John Lennon, Dimebag Darrell, George Harrison, Bankroll Fresh, Stevie Ray Vaughan and Elvis Presley inked on his knuckles. He later confessed that without these artists he wouldn’t be making music.

Malone has a praying hands with a gun tattoo on his right arm which represents evil and danger. The praying hands represent respect, hope, and courage. He has never told the media the reason for getting this tattoo inked on his arm.

He has a gun with a snake inked around his left arm in recognition of the ‘The Second Amendment” to the US constitution. This amendment protects the individual right to keep and bear arms.

It is a symbol of power and a person’s ability to withstand obstacles in life.

Post Malone has been getting all these tattoos like the other artists in the film and music industry. He confessed that the face tattoos are because of his insecurity about his looks. He has various artists and song lyrics inked to his body as a tribute to the work he loves doing the most. Some say that these tattoos are related to his deteriorating mental health but he has never been public with his mental health issues.