In ancient times, there was no writing in Polynesian culture. So most importantly, the Polynesian people used to get tattoos with distinctive signs to express their identity and personality. Moreover, the tattoo indicates status in a hierarchical society as well as sexual maturity, genealogy. It denotes one’s rank within the society. Nearly everyone in ancient Polynesian society was tattoo bearers.

The Polynesian tattoo designs varied from island to island depending on the tribes evolution. Moreover, the original styles consisted of simple repeating patterns on the body. It was usually straight lines. The meanings of these patterns are almost unknown now. The most popular style used these days is from the Marquesas Island tattoos. It consists of rounded patterns.

These tattoos and their location on the body determined a lot of things in Polynesian culture. Moreover the person’s genealogy, position in society and even personal achievements. Tattooing used to be a sacred ceremony. The high ranking members of the tribe had tattoos. The members of the lowest social level couldn’t get any kind of tattoo.

Famous Polynesian tattoos with their meanings

There is a variety of Polynesian tattoo with varied degree of meaning. So, sometimes it becomes hard to choose the best one. Below is the list of all the tattoos that are trendy and creative.

This tattoo is a symbol of guidance and dignity throughout the world.

This tattoo has various connotations and these depends solely on the person who is getting the tattoo. This tattoo symbolize that you have survived through adversity. For example, the Gods were summoned in the form of Geckos and lizards. The lizards were a way of communication between God and men.

Turtles are an important part of Polynesian tattoo culture. This tattoo represent immortality. It is in association with virility.

This tattoo represent flow of life and death. The ocean is the second home of Polynesians.

The spearhead is an ancient symbol of triumph and war. Therefore, this tattoo used to be the favourite of the warriors of the tribe.

This tattoo denotes all the people of the tribe irrespective of their gender and class. Therefore, It is to represent singularity.

This tattoo shows a state of tranquility. As a matter of fact, stingrays are very energetic and sharp. In other words this tattoo can also be used to represent these qualities within a person.

Tiki tattoo resembles the human face. It represents the Demi Gods of the Polynesian culture.

The placement of Polynesian tattoos plays a great role in the Polynesian culture. The tattoos if placed on head demonstrate spirituality and enlightenment. Placement on the higher trunk would signify altruism and truthfulness. Getting a tattoo on lower trunk signify self confidence and resolution. Tattoos on upper arms and shoulders represent vitality and endurance. On the lower arms and shoulders. The tattoos represent creativity and invention. Getting tattoos on the legs would denote movement and improvement. However, getting tattoos on the joints signify connection or union.

To sum up don’t let the placements of these tattoos limit you in any way. You can get any of these tattoos on any part of your body as you like. The patterns you choose to get inked with should be significant to you and not to anyone else before you. 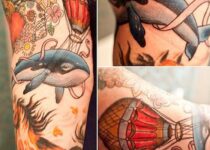