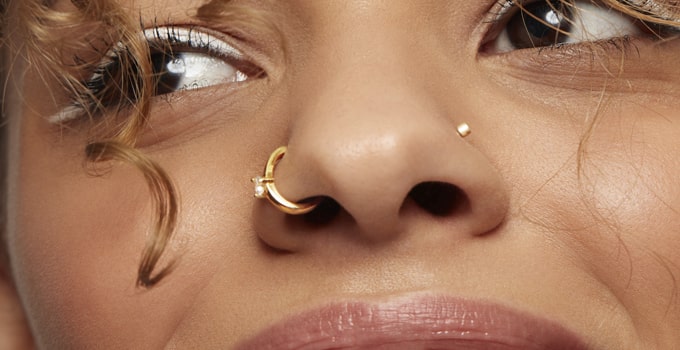 Nose piercing is piercing of the skin or cartilage piercing for the purpose of wearing nose jewelry. It is just like ear piercing. Nose piercing is primarily of the Indian Culture, estimated to be over 4000 years of practice. We can also see them in countries like Pakistan, Sri Lanka, Nepal, and some other parts of southeast Asia. This practice of nose piercing is basically a culture of the tribes in the Philippines. In India, people associate this trend of nose piercing with Ayurveda medicines. And with various religious practices. Earlier nose piercing was common for Indian women. But after it became trendy both men and women across the globe have started getting nose piercing done.

Earlier nose piercing was in association with ethnic minorities or negative connotations. In India, the left-out part of a female body is a preferred position for piercing. Followed by some orthodox folk because Ayurveda associates this location with the female reproductive organs. In India, like others, it is regarded as a mark of beauty and social standing. And Hindu’s honor to, Parvati (the goddess of marriage). It is often an integral part of Indian wedding jewelry. This practice is very common among women of Maharashtra, Rajasthan, Bengal, Tamil, Bihar, Uttar Pradesh. Nowadays, nostril piercing is getting very popular among other countries like South America, the United States of America, Canada, Australia, Africa, Europe, and Japan. For some people, it is just a fashion statement. Some get it for religious purposes. Also, nose piercing is the symbol of a married woman in India and Pakistan.

Significance of nose piercing in India

In Hindu tradition, it is not only a fashion statement. But as a way of showing respect to the Indian culture, religion, and ancestral practices. The nose ring or Stud “Nath” is an integral part of Indian Culture for ages. and has its significance today also. Wearing Nath in the Hindu religion is common. Hindu women wear them more than any other woman of any other faith in India. In India, girls get them at a very early age to maintain their cultural identity. It is an indication of physical maturity that she is now eligible for marriage.

Nostril – Piercing performed on either the left or right nostril.

Nasal septum – The septum or nasal septum is the cartilaginous wall that divides the two nostrils. People living in countries like India, Nepal, and Bangladesh prefer this location. This location is very popular amongst south Indian dancers and certain native American people.

Nose bridge – It is on the bridge of the nose, between the eye area by piercing through the skin.

Piercing has become a popular trend around the world, many countries and religions follow this practice as a fashion statement and some do it as a religious practice.  Different cultures have different Interpretations of this practice, in India, nostril piercing signifies the status of a woman. Nostril piercing has one of the longest and richest histories of any type of body piercing. It has been practiced for over 4000-5000 years, few theories tell us that it was originated in the middle east in the 16th century and was brought into India by the Arabs. There has also been some evidence of the potential health benefits of nose piercing.