McGregor was born on July 14, 1988, in Dublin, Ireland. Gregor is one of the most dominant fighters in the history of UFC. He is famous for his astonishing knockout power and notorious trash talk. He is popular among people as the king of combat sports. Apart from being a well-known fighter, he is also famous for his tattoos. He has got impressive tattoos on his body which many people look up to for inspiration. Let’s have a look at some McGregor Tattoos.

McGregor first debuted in UFC back in 2013 and at that time, his body was more or less a blank canvas. He only had a couple of tattoos – one right above his left heel in Arabic and the spiral helix of thorns connected to a winged crucifix on his back. Over the years, he has added many more tattoos on his body.

McGregor Tattoos and their meaning

McGregor has has got eight tattoos on his body till date. Below are the names of those tattoos along with their meanings.

Where? – On his left heel

This tattoo was the first tattoo of McGregor. He got this tattoo when he was drunk. He got it when he was on a vacation in Cyprus. McGregor has always been fond of Arabic tattoos but since he was drinking while getting the tattoo. He doesn’t even know the meaning of the tattoo.

Where? – On the nape of his neck

This tattoo represents the event of Christ’s crucifixion. This event is one of the most important event in Christianity. Many people think that McGregor is a Christian because of this tattoo, but according to him, he is an atheist. He doesn’t believe in any religion. He got this tattoo because he found it aesthetically pleasing.

Where? – On his back

This tattoo pays homage to the sacrifice of Jesus Christ. But it has variety of other meaning. Since, McGregor is an atheist, he might have a different meaning in his mind. This tattoo is inked just below his crucifix tattoo.

Where? – On his chest

The gorilla tattoo that McGregor got inked with has a crown on his head and is eating a heart. It is the logo of ‘Straight Blast Gym’ in Ireland where he used to take mixed martial arts lessons from his head coach named John Kavanagh.

McGregor has a rose bush tattoo along with a clock showing 3:35 pm, the significance of this time remains unknown. The tattoo also has a large dagger going through the roses. The back of the tattoo has a picture of a man wearing a top hat. A cartoon wearing boxing gloves is also inked along with the rose bush tattoo. The meaning of this tattoo was never disclosed.

This tattoo represents McGregor’s life motto, which is, ‘Slow is smooth, Smooth is fast’. He lives by this life motto.

Where? – On his right side of abdomen

According to McGregor, a tiger is a very courageous animal. He also has a habit of incorporating the moves of attacking animals into his training.

McGregor has got both his name as well as his nickname, notorious, inked over his abdomen. He got this tattoo because he wanted to.

McGregor likes the idea of getting inked. Generally, he doesn’t have a meaning behind the tattoo he chooses to get. He gets tattoos because he likes getting inked and because tattoos look beautiful and creative. It’s a form of art for him which showcases his personality in a better way. 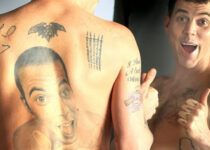 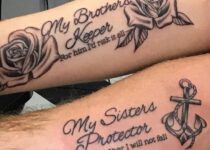 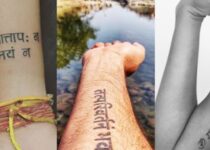