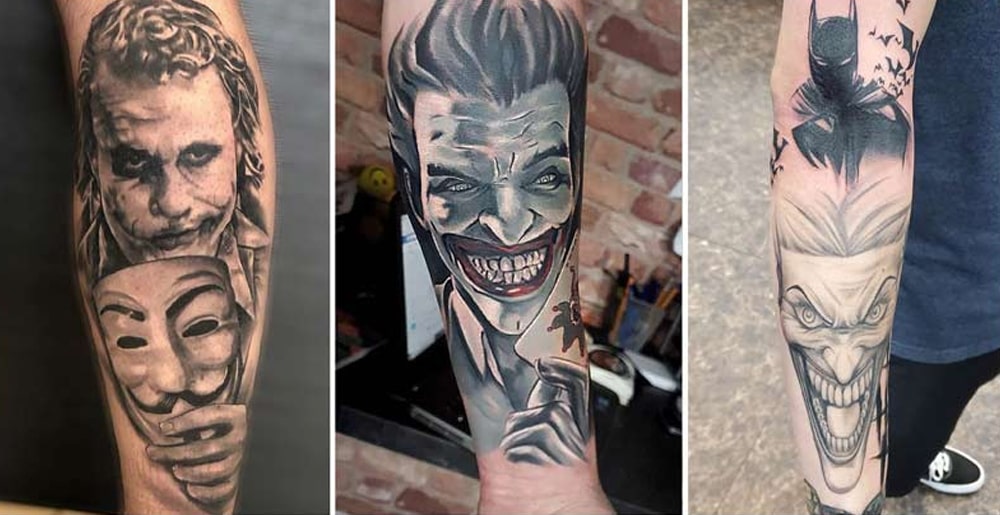 Joker tattoo is one of the most popular tattoos among the people who love or are a fan of the Batman series. His persona is very fascinating. He is one of the most iconic villains of all times. His vibrant personality always stands out and thereby the joker tattoos do the same. These tattoos are eye catchy and grabs the attention of those who are around you. These tattoos also help you in expressing your feelings or attitude that you carry. Some of the joker tattoos depict scenes from the duels between joker and the Batman. Joker puts batman through circumstances which makes him question what he believes in which is why he’s such a cool character. Lets look at some of the joker tattoos.

The girl joker tattoo is popular amongst women. You can customize it as per your taste. If you’re funny, entertaining, sad, scary, wicked etc. then you can go for this tattoo. Most people usually prefer to get this tattoo on their leg, back, shoulder and waist.

This tattoo has a long history and they are famous as the prankster joker. They are mostly for people who are fun loving and love to prank. This tattoo has a joker face covered with a cloth hat with three bells hanging around and the broad smile opening the mouth wide from ears to ears. This is a fun tattoo.

The Joker dragon tattoo represents power, nobility, strength and magic. It is mostly for wrestlers, militants, army men etc. This tattoo has colorful variations as well as dark black ink with grey shades. These are on larger areas such as the back, lower back and chest.

The face of the joker is inspired by the skull tattoo. The red color used for the eyes to make it look dangerous while the green and red combination of the hat adds to its wicked look. This is an excellent choice for a tattoo.

A Joker Card Tattoo on Hand

This tattoo comes in handy when you don’t want to go for a full fledged joker face but also want to get something related to a joker. This tattoo is inspired by the spades and best for arms, legs, back and the lower back. It is for people who love to play cards.

This tattoo represents your love and attachment for the Joker and Harley Quinn love story. This has an image of joker embracing Harley with a background full of hearts. It signifies love and passion.

This tattoo has the most famous catch phrase of joker i.e. ‘why so serious?’ The design is quite complicated as it makes joker’s face using his phrase. It looks really attractive and make you stand out in the crowd.

A Cartoon Batman and Joker Tattoos

The cartoon Batman and Joker tattoo brings in a change to the regular joker tattoo by making it sort of funny rather than too serious. It is for people who watch cartoons as this brings in quite the nostalgia.

Heath Ledger’s version of the Joker is considered to be the best version of joker hence, many people get this tattoo on their body as a tribute to the actor. It portrays the actor as joker, holding a joker card with his popular joker expression all over his face.

The simple tribal joker tattoo is inspired by tribal tattoos. It gives a happy as well as wicked feeling. Men get this tattoo on the back, shoulder, and legs.

Joker tattoos are getting more and more popular these days with numerous designs to choose from. Even though the ideas are in implementation by people in European and American countries, more people from all over the world are going for it. If you’re someone who resonate with the ideals of the Joker and want to get tattoos then you should definitely go for this tattoo. Choose a professional tattoo artist for your own safety. There’s variety of options and designs available which you can get and express yourself.