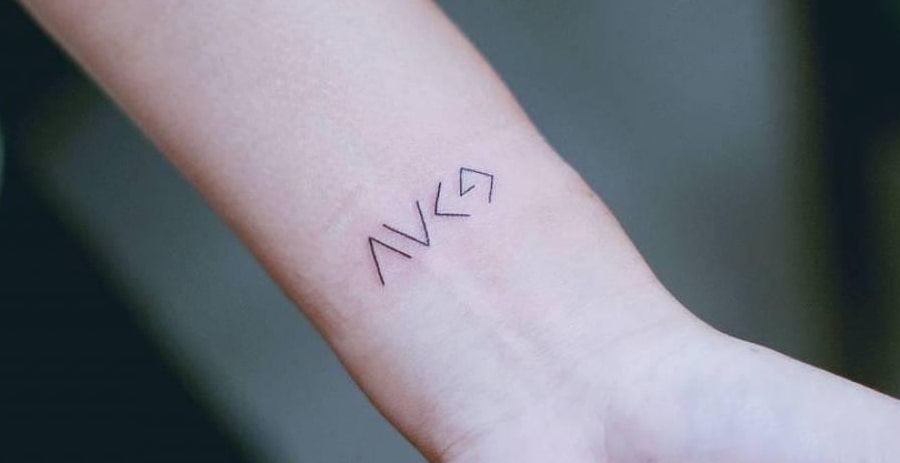 God is greater than highs and lows tattoos are amongst the most popular and interesting tattoo designs in today’s world. It might be hard to believe how such a complex phrase can be translated into something so unique. Symbols are used to denote such a large phrase. The phrase is stylized using symbols that give it a striking image that has a universal significance and meaning which is the same all around the globe.

The most basic form of the tattoo is represented by an edged alphabet ‘G’, followed by the greater than sign and two arrows that point towards up and down. This design is done with thin and fine lines using very minimalistic details. One can add elements of significance to it for some personalization effect, but it is best suited when used alone. Many tattoo enthusiasts focus on this tattoo as it represents their religious belief and also help them in spreading they’re theological believes with the help of their tattoos.

Meaning Of God Is Greater Than The Highs And Lows Tattoos

The God is greater than the highs and lows tattoo is meant to represent the fact that God’s presence persists regardless of the situation. It symbolizes perseverance through hardship by reminding of the greater presence that perseveres. It is often depicted through symbolic representation, with a G for god, a ‘greater than’ symbol, and ‘^ v’ for the ‘higher’ and ‘lower’ depictions. Most people often chose these tattoos for their minimalistic designs in order to represent their religion. It is possible to share specific ideas and phrases like this one without actually having to write out the entire phrase with the correct symbolic representation.

The God is greater than highs and lows tattoo is minimalistic and one can get it done wherever they want as it is ideal for any part of the body. However, the most preferable parts of the body to get inked are the knuckles, arms, legs, feet, neck, shoulders, chest, thighs, hands, etc. It looks extremely beautiful and makes you stand out in the crowd.

The cross tattoo is a casual combination of logos. In this, the letter ‘G’ is switched by a cross sign which is also symbolic of Jesus Christ. The up and down arrows are changed with triangles.

This tattoo design is embedded inside a rhombus with black and white ink which looks really attractive and the little shading effect makes it look realistic. The scenery represents nature and the fact that God dwells in nature completely.

The horizontal cross symbol tattoo uses the basic symbol with a cross added to it. Instead of the regular rectangular shape, the cross is placed in a horizontal position. It looks quite neat and chic.

This tattoo has an additional feature where they add mountains which gives it a realistic look while adding a little bit of nature to it.

This tattoo design has an arrow passing through it which makes it looks very attractive.

The tribal gun tattoo has mountains which connect it with the crosses that make it look like a graveyard. Both the elements, nevertheless, have a spiritual and religious touch to the whole design.

The god is greater than highs and lows tattoo is perfect for people who are mostly religious but it is not necessary for only religious people to get it. These tattoos are perfect for anybody who likes to keep everything minimal and chic. These look super cool. However, one can easily get it modified as well he aesthetics of this tattoo completely spends on your creativity levels. A person who is trying to get inked should do an extensive research before they finalize the pattern or design that they want to go for as it’s going to stay with them forever.