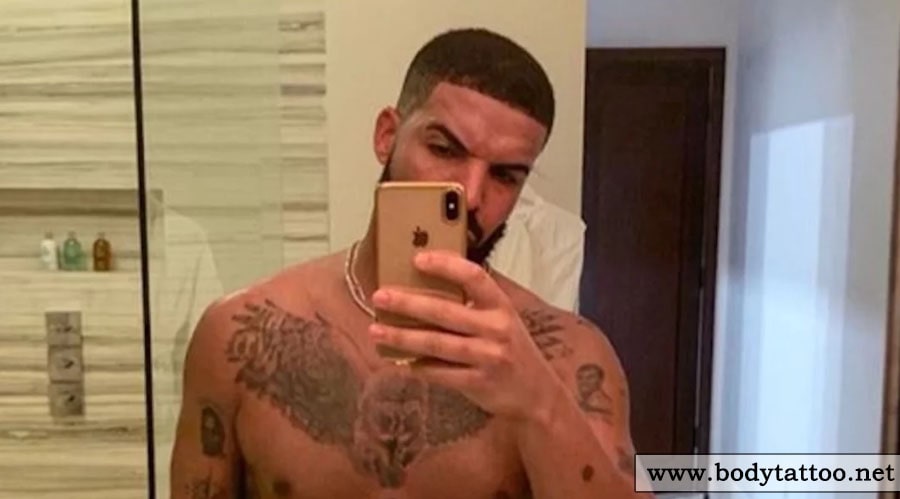 Aubrey drake graham aka Drake is a famous Canadian singer, songwriter, actor, rapper and entrepreneur. He earned recognition in the 2000s as an actor. Later he started singing and producing his own music. Throughout his career, he has earned tons of awards through his work. He is also amongst the best selling music artists. He is also known for his numerous tattoos. Many fans have tried to copy his tattoos. Lets have a look at some Drake tattoos with their meanings.

Where?: On his left deltoid

Drake got BBK inked on his left shoulder to pay tribute to the North London grime group “Boy Better Know”. He shares a good, close relationship with this group so he got this one inked on his body.

He has the portrait of famous rapper Lil Wayne inked on his left arm because he was very close to him so much so that Drake even mentioned that he got successful because of Lil Wayne’s’ support.

This tattoo is inspired by Jamaican Dancehall Star Popcorn. Untruly is the title of a song by Popcorn.

Where?: Near the Triceps

Drake’s relationship with his father, Dennis Graham, was not that great. His parents got divorced when he was very young. Drake’s father was in prison and his mother raised him alone. The father and son duo have made peace with each other and share a good relationship now. This tattoo reminds drake of the bad times that he and his family faces when he was young.

Where?: On the backside if his upper arm

We believe that Drake got this inked because he loves French colognes. Some people that think he has a link with this cologne as the name of this cologne sounds like his own stage name.

Where?: On the left side of his Torso

This is a portrait of Helen Folasade Adu, a Nigerian singer, popularly known as Sade Adu. Drake loved her aura when he met her on a European tour and got a tattoo of her because he adores her. He also said that “Her brand is so strong and she’s such an amazing woman, but the melody she chooses to use and her voice has that dark, and sexy feel that a lot of So Far Gone has.”

Eye of Horus is an Egyptian symbol that means good health, protection and royal power.

Where?: On his forearm

This is a Swedish word which translates to ‘October Lion hearted’. The October month had been very special to Drake. The word Lejonhjarta was inspired by twin Swedish models, Elizabeth and Victoria Lejonhjarta, with whom Drake was seen hanging around.

This Tattoo is a representation of his love towards the music industry.

This tattoo is a symbol of his bond and love towards his friends.

‘Everything Happens For A Reason Sweet Thing’ Tattoo

Where?: In his forearm

Drake shared a photo of this tattoo saying ‘Toronto with Mr always’. He was born in Toronto, Canada.

Where?: On his right Forearm

Where?: On his right torso

This is his Hometown’s area code.

Drake was very close to his uncle who helped him get where he is right now.

He considered his grandmother his lucky charm so he got her portray tatted in his back.

Most of Drake’s Tattoo is a tribute to the people who supported him and helped him get where he is now. He has got portraits of the people he is very close to like his mother, grandmother, father, uncle Steve, Lil Wayne, etc. He also got a few tattoos when he was in a relationship with the popular singer Rihanna.