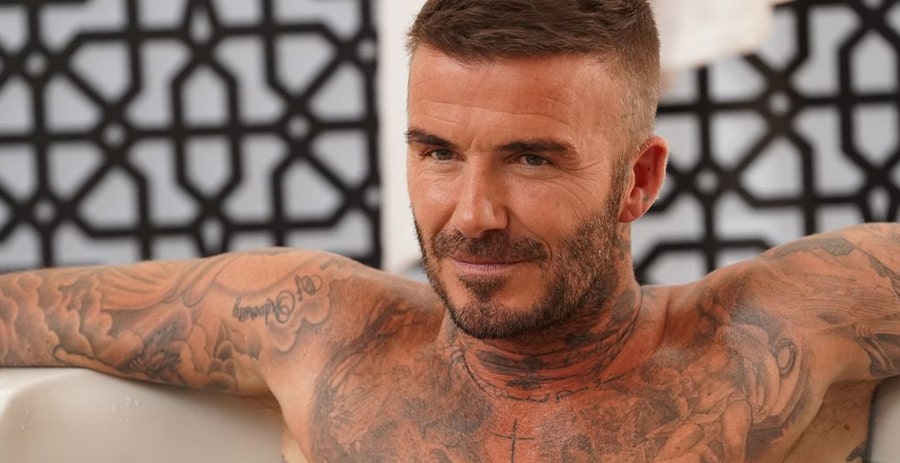 David Robert Joseph Beckham aka David Beckham (born on 2nd May 1975) is an English former professional footballer who is regarded as a living legend in the game’s history. He was an exceptional player of his time. Beckham has played for big football clubs like Manchester United, Real Madrid, etc. as jersey number 7. He is also the current president and Co-owner of Italian giant Inter Milan CF. Beckham is also known for modeling, he has various partnerships with different fashion brands because of his looks and popularity. Talking about his tattoos, he has a lot of them inked in his whole body. Let’s have a look at some David Beckham Tattoos.

David Beckham Tattoos On His Body

Where?: On the left side of his neck

Rose tattoos are a symbol of rebirth, New beginnings, true love, feelings, and emotions. These tattoos signify mature love and protection from an envious lover.

Harper is his daughter’s name who was born in the year 2011. Beckham added the words ‘pretty lady’ near this tattoo four years later.

Where?: On the torso

Buster is David’s eldest son Brooklyn’s nickname. He got this tattoo as a tribute to him.

When asked about this tattoo Beckham said “It’s Jesus being carried by three cherubs and obviously the cherubs are my boys and so my thought of it is that at some point my boys are going to need to look after me and that’s what they’re doing in the picture. It means a lot.”

Where?: On his right shoulder

Where?: On his right peck

Beckham got this cherub tattoo for his third son, Cruz Beckham. The cherub is surrounded by Hebrew text meaning, ‘My son, do not forget my teachings but keep my commands in your heart’.

Where?: On his right torso

It is a famous painting of Jesus Christ.

Where?: On his arms

Where?: On his arms

This tattoo was inspired by the quote of Roman Emperor Tiberius. It was also used by Caligula.

Where?: Near his right wrist

Where?: On his right hand

Victoria is the love of his life, his wife.

David Beckham has got tattoos that show his love for his family. He has got tattoos to pay tribute to his sons and daughter. He has a few tattoos dedicated to his wife. We can also tell that Beckham is a religious man by looking at his religious tattoos which includes texts from religious books, portrait of Jesus Christ, Angels, etc. His tattoos are looked upon as an inspiration by his fans.