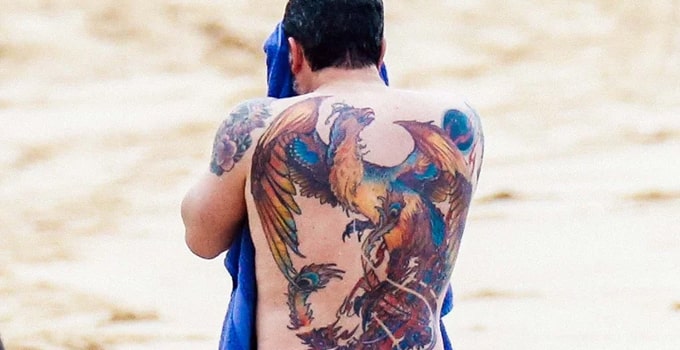 Benjamin Géza Affleck-Boldt aka Ben Affleck (born on 14th August 1972) is an American actor, producer, film director, philanthropist, and screenwriter. Ben was born in Berkley, California, United States of America. He is popular for portraying the role of Bruce Wayne/Batman in the DC movies. He has won quite a few accolades throughout his amazing career collecting prestigious awards like Golden Globe Awards, Academy Awards, etc. Talking about his tattoos he has got a few tattoos inked on his body with a giant one on his back. The following are some of the Ben Affleck tattoos with their meanings and location.

Ben Affleck Tattoos On His Body

Where?: On his Back

Ben has a giant Phoenix inked on his back. This tattoo covers most of the area of his back. This tattoo became a hot topic of discussion amongst his fans when it was revealed during a shirtless scene in Netflix’s Triple Frontier movie. Ben said in an interview that this tattoo is an permanent tattoo and not a fake one and it is very close to him. He calls this tattoo as “Phoenix rising from my ass. “

Cross signifies his religious beliefs. The flowers surrounding the cross are a cover up for his old spade tattoo.

The meaning if this one is unknown, Ben hasn’t talked about this tattoo anywhere, he has kept it as a mystery. He has got MOH NON-TE written above it and TA OR underneath the OV.

Where?: On the extreme lower side of his lower body

He got this one to cover up his previous tattoo which was the name of his ex-girlfriend. The couple dated for a few years in high school before breaking up.

Ben Affleck is a famous Hollywood personality who has a huge fan following. He won the hearts of many superhero movie fans when he appeared as Batman in the DC movies. Ben has five tattoos inked on his body. All of them have a meaning and a story to them. He has one huge Phoenix tattoo and four small tattoos inked on his body. The meaning and story of the phoenix tattoo are unknown but the actor has talked about his other tattoos and explained the story behind them in a few interactions.