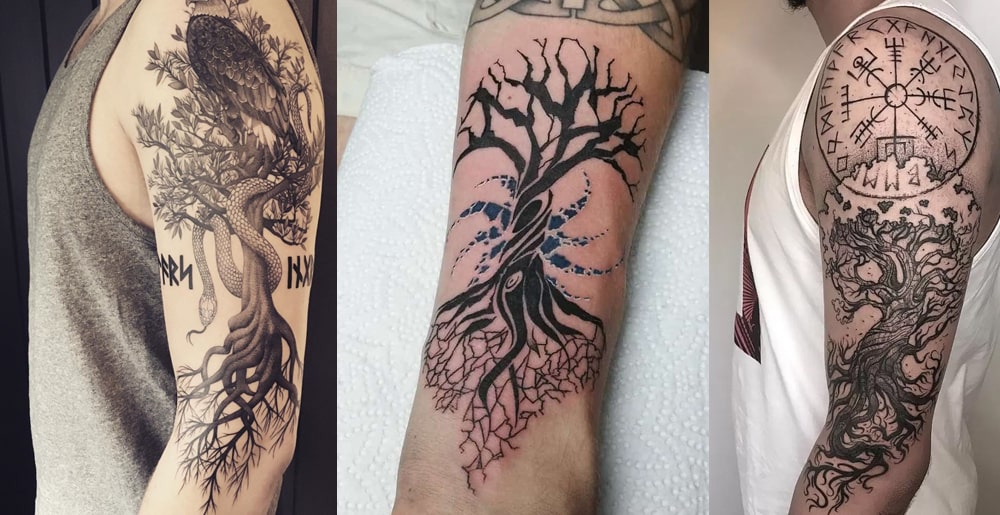 This tattoo displays a tree from Norse Mythology. Yggdrasil, in Norse Mythology, is the world tree. And a giant Ash supporting the universe. According to the legend of the great tree. One of the roots of the Yggdrasil went into the other world. And the other root went into giants’ country which led it to turn into God’s territory. Yggdrasil is a tree of cosmic proportions. It also has the names – Tree of Life or the World Tree. In fact, you must be familiar with the Life Tree due to its numerous depictions in the MCU’s Thor movies. Also, in the 2018 game of the year, God of War. Yggdrasil is the center of everything. Here, we will know about some Yggdrasil tattoos.

The Yggdrasil or The Tree of Life is a highly spiritual symbol from Norse Mythology. It represents how everything is in connection in the universe. It is a tree whose roots connect down to the darker pieces of the universe. The branches represent the good in the universe. Yggdrasil managed to preserve the cosmos before Ragnarok brought about the cataclysm that would destroy everything. Despite the interference of some creatures. The Yggdrasil never stumbled and its defenses stood strong against everything. The tree of life signifies strength, resilience, and power because of this.

Yggdrasil tattoos with their meanings

Most of the Yggdrasil tattoos contain intricate details with ancient Viking symbols. That brings forth the meaning of the tattoo more prominently. The Helm of Awe symbolizes protection. The ones getting these tattoos are to be in protection forever. They also show respect for mother nature and every life cycle out there. Another Viking symbol is the Vegvisir symbol. These tattoos guide people and bring them to protection.

Ouroboros is a Viking symbol representing a dragon or serpent eating its own tail. It represents eternity and the life cycle of things. On one hand, the Yggdrasil symbol represents life and growth. The Ouroboros tattoo symbolizes lifespan from birth to death. It is one of the best tattoos for people who appreciate life’s highs and lows by being highly spiritual. It also represents reincarnation and infinity.

The minimalist Yggdrasil tattoo is not like the other tattoos. It is devoid of the tree with branches concept. It is rather a geometric pattern representing the Tree of Life. Like other Yggdrasil tattoos, this tattoo also represents the tree and roots which are connected to the nine worlds. It is a more modern concept than a traditional one. This tattoo is more flexible when making the stature of a tree.

In this tattoo, the extremities of the tree, branches, and roots flow into their respective triangles. In turn, gives it a mirror effect. Splashes of blue paint make the reddish-purple tinge in the tattoo more vibrant. And is the difference between the two halves. It is one of the most intricate depictions of the Yggdrasil.

This tattoo, though being minimalistic in nature, contains a lot of compositional elements. It is impressive and the concept of less is more is applied to this inked artwork. It is applied to one’s arm in such a way that it makes it seem like a natural extension.

The Tree of Life or the Yggdrasil tattoo represents life. And its interconnectivity. By featuring an extensive network of branches which are held together by a large trunk in the center. Each branch extends into a fractal which symbolizes interconnectedness. The world tree or the Yggdrasil connects the whole universe and everything within the nine worlds. It is the Nine Worlds Network. This also depicts that each group of branches tends to branch out. They separate progressively to merge with the descendants of others.