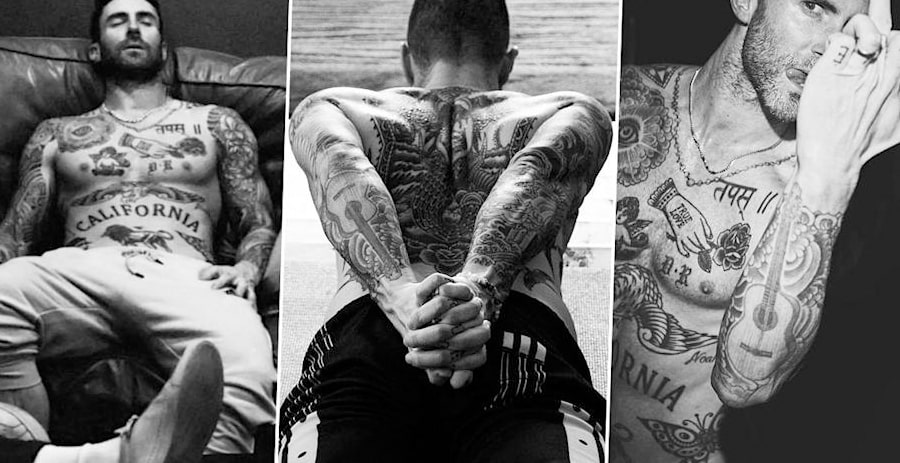 Adam Noah Levine (born on 18th March 1979 in Los Angeles, USA) or Adam Levine is an American singer, songwriter, actor, and television personality. He gained popularity by being the lead singer of the American pop band Maroon 5. He also became a coach of the American reality TV show The Voice in 2011. Let’s have a look at some popular Adam Levine tattoos.

Adam Levine does not feel shy while heavily inking his already sexy body with tattoos. The superstar has 27 tattoos on his body to add to his appearance. All of his tattoos are of great significance and are in association with special events in his life from his band Maroon 5 to his mom.

This tattoo is one of Adam’s most well known tattoos and is inked on his left forearm. It shows his passion for music and the instrument that he plays best, which is the guitar.

The paw print tattoo on Adam’s right shoulder signifies his love for animals. Almost all his fans are aware of his canine crush, a golden retrieved Frankie girl who passed away.

His left shoulder is covered with a beautiful rose tattoo which has now become a part of Adam’s gigantic sleeve tattoo.

Adam has got the word “Tapas” inked right above his heart on his chest in Sanskrit script. The word means meditation through penance, bodily mortification, austerity, and bodily value. Adam hasn’t revealed much about this tattoo to the public and says he put it in a place that’s more hidden to avoid the public eye.

Adam got a tattoo of cherry blossoms and doves in remembrance of many lives that were lost as a result of the 9/11 terrorist attack. He wanted to pay a heavy tribute to them. We cannot help but love the artist as well as the tattoo for this act.

The Maroon 5 lead singer’s hometown is Los Angeles and he has shown his love for the same with a tattoo of it on the top of his bicep.

Adam has a black beads tattoo forming a necklace that decorates his chest. He got this tattoo when he travelled to Japan.

This tattoo is still a mystery among Adam Levine’s fans. The ginormous mermaid covers his back entirely. The complex tattoo on the backdrop of this one was inked in around 6 months by Bryan Randolph of Spider Murphy’s Tattoo San Rafael, CA.

These alphabets on his chest are the initials of his daughter’s name “Dusty Rose.” It was misinterpreted earlier by Twitteratis when they thought it was ‘BRO’ where Adam’s nipple meant the alphabet “O”

Adam has got the door number of the room that Maroon 5 used to record their first album tattooed on his forearm. It signifies his love for his band and music in general.

Adam has his middle and last name “Noah Levine” inked on his upper left rib.

Levine got the roman numeral “X” inked on his left bicep on account of Maroon 5’s 10th anniversary. Apparently, he is very close with his bandmates and considers Maroon 5 as very close to his heart.

Some Other Famous Adam Levine Tattoos

Adam Levine is one of the most talented artists of the music industry but besides his music and acting, he is also famous for his bodily art. These tats have a deeper meaning in Adam’s life and most of them are inked as tributes to people who are close to him.